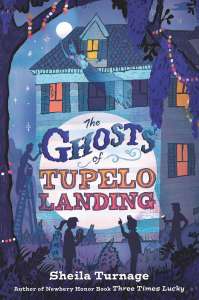 The Ghosts of Tupelo Landing
by Sheila Turnage

Has excellent ideas for throwing a mystery party:
http://mommypoppins.com/kids/kids-mystery-party-games-and-ideas-for-a-kid-friendly-murder-mystery-party

Murder Mystery Party for Kids (all instructions and clues are free):
http://trevor-hopkins.com/mystery/

CBS-6 of the most haunted houses in the U.S.:
http://www.cbsnews.com/media/six-of-the-most-haunted-houses-in-the-us/

The story of Lincoln’s ghost:
http://channel.nationalgeographic.com/channel/killing-lincoln/articles/the-story-of-lincolns-ghost/

Have an Auction:
Auction off trinkets from garage sales, freebies, etc.  Create tall tales about each item. For example: you could say a tiara was worn by Queen Elizabeth or soap from a hotel came from Elvis Presley’s room. Have kids bid on the items with fake money.

Miss Lana dresses like old time movie stars.  Have a dress like a star day.  Guess who each person is and find out why they chose that star.

Mo makes up names for the food served at the restaurant.  For example she said ‘batter up’ when she has an order for pancakes.  Make up names for some of your favorite foods.

Mo calls Sally Amanda ‘Salamander’.  Can you create a new name by putting parts of your names together? This could become your sleuthing name.

Mo writes letters to the mother she never knew.  What would you say in a letter to a mother you never knew?

Mo says, “waitressing is like deep cover with tips.” What other jobs could give you deep cover and allow you to eavesdrop on conversations?

Miss Lana says, “The truth is like spandex, sugar. It may not look like a good fit at first, but if you ease into it and wiggle around, it winds up fitting like your skin.”  What does she mean by this.

Mo says, “Grandmother Lacy is the oldest nice person.”  Is she making a statement about old people, and if so, what is it?  Why do you think many old people are mean?

Mo and Dale hide a tape recorder in order to record the ghost. Later they interpret what they hear.  Bring in a recording you have made of different sounds and voices.  Have students figure out what is making the sounds on the recording. Have students see if they can recognize the different voices on the tape.

10 ways to deal with negative or difficult people:
http://tinybuddha.com/blog/how-to-deal-with-negative-people-or-difficult-people/

Interview the elders in your town.

Books About Ghosts:
Bellairs, John. The ghost in the mirror. Rose Rita Pottinger and Mrs. Zimmermann are transported back to 1828 to save the Weiss family from being destroyed by a wicked wizard. (NoveList)

Books About Haunted Places:
Keene, Carolyn. Halloween hoax.  Nancy and the Clue Crew visit the television studio of their favorite show and wonder if the studio is haunted because of all of the scary noises and creepy shadows. (NoveList)

Levy, Elizabeth. Something queer at the haunted school. Two amateur detectives investigate a haunting of their school that starts around Halloween. (NoveList)

Books About Mysteries and Restaurants:
Markley, Jan. Dead frog on the porch: a megabyte mystery. Twelve-year-old twin sisters Cyd and Jane plan to spend the summer writing a mystery novel but instead find themselves propelled into an international plot involving evil scientists and giant, genetically stretched frogs. (NoveList)

Stevens, Rogers. The comic cafe. When their overwhelmed parents take an unplanned vacation, Wilf and his four younger sisters decide to renovate the family cafe for their return, but ghostly sounds, oddball visitors, and the mystery of the cafe’s previous owner complicate matters. (NoveList)

Series About Mystery Stories and Haunted Places:
Wilson, Eric. The Green Gables detectives. These books are Attention-grabbing, and they share: the genre ‘Mystery stories’ and the subject ‘Haunted places’. (NoveList)

Books About Small Town Living:
Bauer, Joan. Hope was here. When sixteen-year-old Hope and the aunt who has raised her move from Brooklyn to Mulhoney, Wisconsin, to work as waitress and cook in the Welcome Stairways diner, they become involved with the diner owner’s political campaign to oust the town’s corrupt mayor. (NoveList)

Beaty, Andrea. Cicada summer.  Twelve-year-old Lily mourns her brother, and has not spoken since the accident she feels she could of prevented, but the summer Tinny comes to town she is the only one who realizes Lily’s secret. (NoveList)

Birney, Betty G. Seven wonders of Sassafras Springs. Eben McAllister searches his small town to see if he can find anything comparable to the real Seven Wonders of the World. (NoveList)

Bullard, Lisa. Turn left at the cow. “Thirteen-year-old Trav feels like a fish out of water in rural Minnesota in this coming-of-age mystery about a boy who discovers his dad may have been a bank robber”. (NoveList)

Clay, Carmichael. Wild things. Stubborn, self-reliant, eleven-year-old Zoe, recently orphaned, moves to the country to live with her prickly half-uncle, a famous doctor and sculptor, and together they learn about trust and the strength of family. (NoveList)

DiCamillo, Kate. Because of Winn-Dixie. Ten-year-old India Opal Buloni describes her first summer in the town of Naomi, Florida, and all the good things that happen to her because of her big ugly dog Winn-Dixie. (NoveList)

Grove, Vicki. Reaching Dustin. Fifth-grader Carly’s assignment to interview a reclusive, brooding classmate leads her to discover some of the events that have caused his antisocial and abusive family’s negative impact on their Missouri farming community, and Carly’s family in particular. (NoveList

Turnage, Sheila. Three times lucky. Washed ashore as a baby in tiny Tupelo Landing, North Carolina, Mo LoBeau, now eleven, and her best friend Dale turn detective when the amnesiac Colonel, owner of a cafe and co-parent of Mo with his cook, Miss Lana, seems implicated in a murder. (NoveList)

Weeks, Sarah. Pie. After the death of Polly Portman, whose award-winning pies put the town of Ipswitch, Pennsylvania, on the map in the 1950s, her devoted niece Alice and Alice’s friend Charlie investigate who is going to extremes to find Aunt Polly’s secret pie crust recipe. (NoveList)

Wiles, Deborah. Love, Ruby Lavender. When her quirky grandmother goes to Hawaii for the summer, nine-year-old Ruby learns to survive on her own in Mississippi by writing letters, befriending chickens as well as the new girl in town, and finally coping with her grandfather’s death. (NoveList)

Books About Mysteries:
Dowell, Frances O’Rourke. Dovey Coe. When accused of murder in her North Carolina mountain town in 1928, Dovey Coe, a stronged-willed twelve-year-old girl, comes to a new understanding of others, including her deaf brother. (NoveList)

Estes, Eleanor. Rufus M. The adventures of seven-year-old Rufus Moffat, living with his widowed mother and older siblings including his encounter with an invisible piano player and his attempts at ventroliquism. (NoveList)

More tightly focused than Turnage’s Newbery Honor book, Three Times Lucky (2012), this absorbing sequel quickly reacquaints readers with the Tupelo Landing, North Carolina, setting and its quirky inhabitants, while introducing a few new characters and another mystery for Mo and her friend Dale (aka the Desperado Detective Agency) to solve. Each question they answer leads to another: Who was the girl whose ghost haunts the dilapidated Old Tupelo Inn, which operated from 1880 to 1938? How did she die? Who killed her? Why does she still haunt the inn? When a sixth-grade history project sends Mo, Dale, and their classmates out to interview elderly residents, the pieces of the puzzle gradually move into place—with an occasional nudge from the ghost herself. The intrepid Mo LoBeau, who narrates the story, gives full credit to her best buddy, the occasionally trepid Dale, and slowly warms up to Harm, an initially cocky newcomer whose family history is intertwined with the mystery. The portrayal of Dale’s attitude toward his father, now in prison, is handled with sensitivity and perceptiveness. Turnage’s ability to create convincing characters and her colorful use of language combine to make this a fresh, droll, rewarding return trip to Tupelo Landing. — Carolyn Phelan

Readers first met Mo LoBeau and her somewhat reluctant sleuthing sidekick, Dale, in Three Times Lucky (BCCB 7/12), when they helped solve a murder in their beloved hometown of Tupelo Landing, NC, and founded the Desperado Detective Agency. Mo is now itching for a new case (Dale decidedly less so), and she finds it when Miss Lana and Grandmother Miss Lacy make the winning bid on the Old Tupelo Inn with all its fine print, which includes, of all things, acknowledgment of a ghost on the premises. As Dale’s brother and Mo’s heartthrob, Lavender, strives to renovate the old inn in time for the community’s 250th birthday celebration, strange things happen, making it hard for him to keep laborers. Could it be the ghost, or is someone else trying to sabotage the renovations? And whoever is responsible, what are their motives? Mo’s spritely narration alternates between pithy, wise remarks and wide-eyed misdirections as she attempts to uncover the truth, outwit and outdo the annoying Attila Celeste, keep Dale from chickening out on the investigation, and figure out how to deal with Harm, the new boy who could turn out to be either friend or foe. With less real danger here than in the first book, some Scooby Doo twists, and a bona fide ghost, this is sure to please both fans and readers new to Mo, who remains as quotable as she is lovable. Gems like “The problem with having a temper is you find out what you’re going to say at the exact same minute everybody else does” guarantee head-nodding identification with the obstreperous heroine; we certainly hope there is more to come from the Desperado Detectives.

Those who visited Tupelo Landing previously (in Newbery Honor book Three Times Lucky, rev. 7/12) are familiar with the numerous colorful inhabitants of this small North Carolina town. Newcomers, though, will need more than a smidgen of time and patience to sort them all out, time that would be more enjoyably spent reading the first book. But once readers get the lay of the land, their efforts will be rewarded. Mo LoBeau (accent on the final syllable) and her best friend Dale find themselves slap-dab in the middle of another mystery. When the abandoned Tupelo Inn goes up for auction, Mo and Dale accompany Miss Lana (who, along with The Colonel, form Mo’s “family of choice”) and Grandmother Miss Lacy (no relation, but the nicest old person in town) to the sale. Fearing that a snippy banker will buy the property, the two women outbid her and take ownership of the ramshackle inn and all its history, including a strange apparition. Mo’s distinctive voice, full of humor and Southern colloquialisms, narrates a tale with as many twists and turns as North Carolina’s own Tar River, giving readers a sweet, laid-back story that reveals a ghost who, bless her heart, just wants to set the record straight about her death. BETTY CARTER
(January/February 2014 Horn Book Magazine)

Gr 4-6–Gr 4-6–The perspicacious Mo LoBeau is at it again! This companion to Three Times Lucky (Dial, 2012) takes place only three months after the Desperado Detective Agency’s first case in Tupelo Landing. Mo and her partner, Dale, are entering the sixth grade and their very first assignment is to interview a town elder. Mo’s first thought is an interview with Grandmother Miss Lacy Thornton, but arch-enemy Anna Celeste Simpson (a.k.a. Attila) has dibs on her. Mo blurts out that she and Dale will interview the ghost that is purportedly haunting the inn that her guardian, Miss Lana, impulsively purchased at an auction with Grandmother Miss Lacy as her partner. The whole town is buzzing about their rash purchase so, in typical Mo fashion, the child tackles the rumors, the ghost, and a few other mysteries head-on. Humor and action abound with Mo’s saucy commentaries comprising the cherry on top. The story is filled with the sixth grader’s colorful, Southern-flavored friends and her equally juicy similes. Underlying all this fun are more serious themes, including an abusive father doing time, a grandfather involved in an illegal distillery, Mo’s absent and unknown mother, and the stunting power of guilt and greed. All of these challenges define Mo’s reality, but her unfailing pluck robs them of their sting.–Kathy Cherniavsky, Ridgefield Library, CT