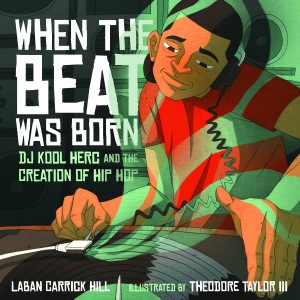 How to Dance Hip Hop:
Learn a Great New Dance For (And With) Your Kids (4:46):
https://www.youtube.com/watch?v=jJ8iUKTUl-s

How to Break Dance:
How to do the 6 step break dancing:
http://www.wikihow.com/Do-the-6-Step-%28Breakdancing%29

How long does it take to become a professional DJ?:
https://answers.yahoo.com/question/index;_ylt=AwrB89SZB49UykkAuEVPmolQ?qid=20110225193854AAVrU1O

Shout Out Activity:
DJ shouted out to his friends who were there.  Sometimes what he said was true and sometimes it was not.  For example, he might shout out about a friend’s cool car even though the friend had no car.  Play some music and take turns shouting out over the music a greeting or something cool about the different people in your group.  Remember to make your shout out rhythmical.

Create a move:
The B-Boys created dance moves such as the toprock, the downrock, the turtle, the windmill, the one-handed handstand freeze, etc. Listen to music and create a move of your own.

Toasting:
Take turns toasting everyone.  An example of toasting is when people at a wedding reception stand and say something really nice about the bride and groom.

Make a Break Activity:
Pick a song you like that has a musical interlude.  Using 2 or more devices, CD players, etc. attempt to make the interlude longer.  See if you can make up a dance to fit the length of the interlude or break.

Have a DJ speak to your kids and demonstrate making the break longer and about his job.

Discussion question:
Clive plugged his speakers into the lamp posts and the lights dimmed on the street.  Are there electrical outlets on the lamp posts today and if there are what would happen if we used them and dimmed the lights?  Compare/contrast the implications of having an impromptu concert on the street today vs. back then.

Read the front flap or the reader’s theater.  Play some hip hop music as children enter and have them talk about what they think the music is.

Biographies of Musicians:
Frisch, Aaron. Dark fiddler: the life and legend of Nicolo Paganini. Retells the life and accomplishments of the virtuoso violinist, who had nearly died and been buried due to a measles outbreak at the age of four and developed to become one of the most celebrated musicians of his time. (NoveList)

Hannah, Jonny. Hot jazz special. Presents an introduction for young readers to some of the leading jazz musicians of the twentieth century, including Louis Armstrong, Gene Krupa, Charlie Parker, and Billie Holiday. (NoveList)

Hopkinson, Deborah. A band of angels: a story inspired by the Jubilee Singers. The daughter of a slave forms a gospel singing group and goes on to tour to raise money to save Fisk University. “Inspired by Ella Sheppard Moore.” (NoveList)

Manning, Mick. The Beatles. An introduction to The Beatles includes coverage of Lennon’s Liverpool childhood, the friendship between McCartney and Harrison, the contributions of manager Brian Epstein and record label boss George Martin, and the group’s famous tour to the USA. (NoveList)

Raschka, Christopher. The Cosmobiography of Sun Ra: the sound of joy is enlightening. A one-hundredth birthday tribute to the late jazz artist explores his observations about humanity’s discriminatory and violent behaviors as well as his efforts to forge world peace through music with the Sun Ra Arkestra. (NoveList)

Robertson, Sebastian. Rock & roll highway: the Robbie Robertson story. An illustrated depiction of Robbie Robertson’s early years traces his first guitar lessons at the age of nine through his rise to becoming a central member of The Band and one of “Rolling Stone” magazine’s top one hundred guitarists. (NoveList)

Ryan, Pam Munoz. When Marian sang: the true recital of Marian Anderson : the voice of a century. An introduction to the life of Marian Anderson, extraordinary singer and civil rights activist, who was the first African American to perform at the Metropolitan Opera, whose life and career encouraged social change. (NoveList)

Winter, Jonah. Dizzy. Breaking all the rules of jazz, Dizzy Gillespie found a way to make his mark in music using his instincts and talents in order to survive a difficult childhood and become one of the most famous musicians of his time. (NoveList)

Biographies of Composers:
Anderson, M.T. Handel, who knew what he liked. In this biography, the man who would later compose some of the world’s most beautiful music is shown to have once been a stubborn little boy with a mind of his own. (NoveList)

Celenza, Anna Harwell. Gershwin’s Rhapsody in Blue. In January of 1924, a twenty-six-year-old pianist, George Gershwin, finds himself slated to compose, in only five weeks, a concerto that defines “American music,” and the result is his masterpiece, Rhapsody in Blue. (NoveList)

Lord, Michelle. A song for Cambodia. A biography of Arn Chorn-Pond who, as a young boy in 1970s Cambodia, survived the Khmer Rouge killing fields because of his skill on the khim, a traditional instrument, and later went on to help heal others and revive Cambodian music and culture. (NoveList)

Mayer-Skumanz, Lane. Beethoven. Presents the life, times, inspirations, and accomplishments of one of the world’s most celebrated composers. (NoveList)

Russell-Brown, Katheryn. Little Melba and her big trombone. “A biography of African American musician Melba Doretta Liston, a virtuoso musician who played the trombone and composed and arranged music for many of the great jazz musicians of the twentieth century. Includes afterword, discography, and sources”–Provided by publisher. (NoveList)

Stanley, Diane. Mozart, the wonder child: a puppet play in three acts. With stunning and expressive illustrations, Diane Stanley portrays Mozart’s turbulent life as a marionette show, inspired by the famous Salzburg Marionette Theatre, using an innovative artistic approach to present the life of a renowned musical genius. In concise and lyrical prose, Stanley presents an honest and sympathetic portrait of the boyhood and tragically short adulthood of a composer whose music has lived on for more than two hundred years. (NoveList)

Biographies of Dancers:
Gladstone, Valerie. A young dancer: the life of an Ailey student. This exciting picture book introduces readers to the world of dance by following Iman Bright, a thirteen-year-old student at the prestigious Ailey School in New York City, as she gets ready for a performance with her fellow students. (NoveLit)

Tallchief, Maria. Tallchief: America’s prima ballerina. Ballerina Maria Tallchief describes her childhood on an Osage reservation, the development of her love of dance, and her rise to success in that field. (NoveList)

This picture-book biography introduces one of the unsung creators of hip-hop, Clive Campbell, who was born in Jamaica in 1955. He was entranced by the massive dance parties thrown by a neighbor, and when his family moved to the Bronx, he took up the name Kool Herc and created the innovative techniques behind hip-hop DJing. Stacking musical breaks on top of each other to fuel long stretches of dancing frenzy, calling the kids with the best moves “break-dancers,” and sending shout-outs to friends and little offhand rhymes over the music—Kool Herc unique and hip-hop wouldn’t exist without any one of these flashes of inspiration. By the time rap music really took off, in the early 1980s, he was already out of the limelight but not without leaving a massive legacy. Aside from the bouncy bio of the book’s star, Hill also highlights the positive social force of hip-hop and the boundless energy of musical joy. It’s all matched by Taylor’s freewheeling artwork. A treat from an underrepresented corner of music history. — Ian Chipman

Bulletin of the Center for Children’s Books:
Hill, Laban Carrick. When the Beat Was Born: DJ Kool Herc and the Creation of Hip Hop. Illustrated by Theodore Taylor III. October 2013

Musical styles tend to develop rather than spring up fully formed, so it’s actually quite amazing to be able to identify the creator of hip hop and the precise innovations that ushered it in. Equipped with his father’s ear-blasting sound system, young Jamaican immigrant Clive Campbell already known by his nickname Herc threw a party for his sister’s birthday in a rented Bronx rec center in 1973: “That’s where Kool Herc became DJ Kool Herc.” Working two turntables, he switched between duplicate vinyl to keep the instrumental breaks playing and the dancing going indefinitely, and breakdancers, shout-outs, MCs, and DJ rivalries all became part of the Kool Herc legacy. Hill’s narration deftly balances detail and momentum, addressing technical innovations while conveying the excitement of listeners on the scene at the birth of something new. Taylor’s delicate linework is swept with streaks of earthy browns and muted greens and reds, suggesting swirls and blasts of sound bombarding the old school crowds. In a closing note, Hill comments on his own experience of the vibrant Bronx community in the early 1980s, at a time when popular media portrayed it as a “one of the most dangerous and desolate places in America.” A timeline of hip hop through the 1988 (the year Hill marks as hip hop going fully mainstream) and a select bibliography are included, and readers whose parents (or grandparents) are game enough might track down Beat Street or The Freshest Kids to watch DJ Kool Herc in action.

(3) K-3 Illustrated by Theodore, III Taylor. Clive (Kool Herc) Campbell, the “father” of hip hop, moved from Jamaica to the Bronx with a passion for music and a dream of DJing. Hill’s “hippity hop[py]” text eventually settles on an appropriate cadence. Taylor’s double-page illustrations capture Herc’s skilled hands at the turntables and the vitality of a burgeoning art form. A welcome addition to an underrepresented subject. Timeline, websites. Bib.
(Spring 2014 Guide)

Gr 3-5–As a child in Jamaica, Clive Campbell aspired to be a DJ. At 13, he moved to the Bronx, where he gained the nickname Hercules because he grew to be more than six feet tall. He shortened the name to Herc, added Kool, and is credited as a pioneer of hip hop. He created a new art form for his parties when he plugged in two turntables to create longer breaks for dancing and began chanting the names of his friends during the breaks. Hill’s descriptive writing is paired with Taylor’s vibrant artwork, which features large crowds dancing, close-up shots of breakdancing, or Herc’s hands masterfully spinning the dual turntables. This is a fine introduction to the topic, and the extensive time line, which spans from 1973 to 1986, will help students with reports and show them how this American art form was created.–Glynis Jean Wray, Ocean County Library, Toms River, NJ