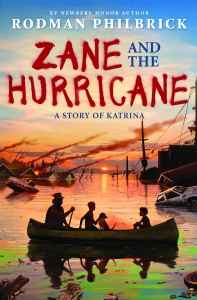 Zane and the Hurricane
A Story of Katrina
by Rodman Philbrick

NOLA news articles about Hurricane Katrina then and now:
http://www.nola.com/katrina/#/0

NOLA interactive graphic and timeline of the flooding of New Orleans and the landfall of Hurricane Katrina:
http://www.nola.com/katrina/graphics/flashflood.swf

PBS’s Postcards from Buster “Back to the Bayou” – Visiting with children affected by Hurricane Katrina:
http://pbskids.org/buster/blog/la_orleanslid_bl.html

LearningtoGive.org ~ Lesson “Disaster Relief – You Can Count on Me!”
This lesson introduces students to opportunities and ways to help after a natural disaster.
http://learningtogive.org/lessons/unit242/lesson1.html

Read the inside flap.

Also by Rodman Philbrick:
Philbrick, Rodman. Coffins. After his father, notorious sea captain Cash Coffin, locks himself in his room in the belief that a dark secret from his past has come back to destroy his family, Jebediah Coffin seeks the aid of his friend, Dr. Davis Bentwood. (NoveList Plus)

Philbrick, Rodman. The fire pony. Eleven-year-old Roy lets himself find a loving family and a new home on the horse ranch which he and his older half-brother happen to come upon. (NoveList Plus)

Philbrick, Rodman. The journal of Douglas Allen Deeds: the Donner Party Expedition. Douglas Deeds, a fifteen-year-old orphan, keeps a journal of his travels by wagon train as a member of the ill-fated Donner Party, which became stranded in the Sierra Nevada mountains in the winter of 1846-47. (NoveList Plus)

Philbrick, Rodman. The last book in the Universe. After an earthquake has destroyed much of the planet, an epileptic teenager nicknamed Spaz begins the heroic fight to bring human intelligence back to the Earth of a distant future. (NoveList Plus)

Philbrick, Rodman. The mostly true adventures of Homer P. Figg. Twelve-year-old Homer, a poor but clever orphan, has extraordinary adventures after running away from his evil uncle to rescue his brother, who has been sold into service in the Civil War. (NoveList Plus)

Philbrick, Rodman. The young man and the sea. After his mother’s death, twelve-year-old Skiff Beaman decides that it is up to him to earn money to take care of himself and his father, so he undertakes a dangerous trip alone out on the ocean off the coast of Maine to try to catch a bluefin tuna. (NoveList Plus)

Plot Driven Attention Grabbing Fiction about Hurricane Katrina:
Paley, Jane. Hopper finds a family: a Hurricane Katrina dog’s survival tale. Jimmy, a yellow Labrador puppy, is separated from his Lake Charles, Louisiana, family and survives the horrors of Hurricane Katrina on his own before being rescued and taken to New York City, where he tries to fit in with a new family and the many neighborhood dogs, and accept his new name. (NoveList Plus)

Rhodes, Jewell Parker. Ninth Ward. In New Orleans’ Ninth Ward, twelve-year-old Lanesha, who can see spirits, and her adopted grandmother have no choice but to stay and weather the storm as Hurricane Katrina bears down upon them. (NoveList Plus)

Tarshis, Lauren. Hurricane Katrina, 2005. Eleven-year-old Barry Hunter and his family attempt to ride out Hurricane Katrina at home in the Lower Ninth Ward in New Orleans when his little sister gets ill, but when the levees break, Barry gets swept away from his family. (NoveList Plus)

Woods, Brenda. Saint Louis Armstrong Beach. As Hurricane Katrina bears down on New Orleans, Saint is stuck in the city after escaping evacuation so he can look for his dog, Shadow, and he, Shadow, and an elderly neighbor, Miz Moran, take shelter in her attic. (NoveList Plus)

Caravantes, Peggy. Hurricane Katrina. Describes how residents of the Gulf States prepared for Hurricane Katrina, the devastation the storm caused when it made landfall, and how the damaged areas have recovered. (NoveList Plus)

Plot-Driven, Fast-Paced Fiction about Hurricanes:
Draper, Sharon. The birthday storm. While in Florida to celebrate her Grammy’s birthday, nine-and-a-half-year-old Sassy worries that an approaching hurricane will ruin not only the party, but a nest of sea turtle eggs, as well. Includes facts about hurricanes and sea turtles. (NoveList Plus)

Duey, Kathleen. Hurricane. During almost four years at sea with her whaling captain father, thirteen-year-old Rebecca finds life boring and difficult–especially when the ship is nearly sunk by a hurricane. (NoveList Plus)

Hobbs, Will. Take me to the river. When North Carolina fourteen-year-old Dylan Sands joins his fifteen-year-old cousin Rio in running the Rio Grande River, they face a tropical storm and a fugitive kidnapper. (NoveList Plus)

Lay, Kathryn. Hurricane Harry. Presents information about hurricanes, using a narrative in which, after Wendy’s essay about the 1900 Galveston hurricane wins a contest, she and her friends receive a trip to the city just as it is is being threatened by Hurricane Harry. (NoveList Plus)

Maguire, Gregory. What-the-Dickens. As a terrible storm rages, ten-year-old Dinah and her brother and sister listen to their cousin Gage’s tale of a newly-hatched, orphaned, skibberee, or tooth fairy, called What-the-Dickens, who hopes to find a home among the skibbereen tribe, if only he can stay out of trouble. (NoveList Plus)

Plot-Driven Books about New Orleans:
Keene, Carolyn. Bonfire masquerade. When Nancy goes on vacation in New Orleans, she and the Hardy boys investigate a crooked real estate scheme and the appearance of a dead body at a masquerade party. (NoveList Plus)

Peck, Richard. The river between us. During the early days of the Civil War, the Pruitt family takes in two mysterious young ladies who have fled New Orleans to come north to Illinois. (NoveList Plus)

Thirteen-year-old Zane Dupree and his trusted dog, Bandy, travel from their home in New Hampshire to New Orleans to visit his great-grandmother, Miss Trissy, the only link to the father who died before he was born. But almost as soon as they arrive, they are caught up in the turmoil of Hurricane Katrina, separated from family, and left on their own to survive. The pair weathers the storm in Miss Trissy’s attic, and they are rescued, via canoe, by Mr. Tru, a celebrated brass player, and his young charge, Malvina, with a story of her own. Together they face difficulties both natural and human, from terrifying swirls of snakes in the putrid floodwater to organized militia “protecting” affluent neighborhoods from looters. Philbrick examines issues of race and class with a deft hand (Zane is of mixed race himself), letting the story unfold directly and leaving moralizing to the reader. Though the convenience of a few plot points strains credibility, the tight prose, harrowing pace, and resonant relationships will appeal to a broad audience. — Thom Barthelmess

To say that Zane has bad timing is “the understatement of the century”; the twelve-year-old (accompanied by his beloved dog, Bandit) makes his first visit to New Orleans and his late father’s grandmother just as Hurricane Katrina bears down on the city. What starts as an idyll turns into an evacuation; then Bandit leaps out of a stopped vehicle, Zane dashes after him, and they end up back at Zane’s great-grandmother’s house in the Ninth Ward as the storm rages. Flooding forces them to the roof, where they’re rescued by Mr. Tru, a local musician, and Malvina, Mr. Tru’s prickly young charge. Together, the group boats and then walks their way through the devastated city to find safety, only to discover the Superdome barred to them, the unflooded wealthy districts armed and hostile, and help nowhere to be found. Philbrick writes with a taut pace, turning the realities of the Katrina disaster into a grim, absorbing adventure that incorporates the infamous details without forcing documentary into the story. Resilient, plainspoken Zane makes an engaging narrator, and his position as an outsider allows explanation to happen organically; his personal journey of connection to the father he never knew (“A dead man who was once exactly my age, and who looked at this place through eyes not much different than my own”) and the African-American side of his family add a personal dimension. Zane’s triumphant survival doesn’t undercut the sheer horror of Katrina’s wrath and civilization’s breakdown, and young readers who know Katrina only as a distant headline memory will gain understanding of nature’s fury and humanity’s failure. End matter includes a map, a timeline, and a collection of relevant facts as well as an author’s note that mentions source material.

(3) 4-6 Zane Dupree and his dog, Bandit, fly from New Hampshire to New Orleans to visit his great-grandmother for the first time. Then Hurricane Katrina strikes. Zane is separated from Miss Trissy during the evacuation and trapped by the floodwaters. Philbrick’s tale of survival is gripping. Timeline.
(Fall 2014 Guide)

Gr 5-8–A boy’s visit to meet his great-grandmother for the first time turns into a nightmare when Hurricane Katrina hits New Orleans. Twelve-year-old Zane has not known many family members other than his mother; after she makes contact with his deceased father’s grandmother, Zane travels to the oppressively humid city. When New Orleans is placed under a mandatory evacuation, Zane and his great-grandmother leave with his dog, Bandy, and her pastor; when Bandy is spooked by growling Dobermans, he leaps from the car, followed by Zane. Zane and Bandy endure the hurricane’s landfall and the failure of the levees at his great-grandmother’s house until they meet a young girl, Malvina, and her guardian, Tru. The trio canoes through the snake-infested waters seeking assistance. Arriving in a neighborhood protected by privately hired security forces leads to vicious threats from the armed guards, who are loading helicopters stuffed with rugs and other expensive items. After their canoe is stolen, they head to the chaos of the Superdome and eventually to a bridge connecting the city to Algiers, in which they hope to find Tru’s cousin. Vivid descriptions of the toxic waters, the commotion at the Superdome, and racial tension are handled factually yet sensitively. Information about unique New Orleans customs, including “jazz funerals,” its history of biracialism, and accents are occasionally inserted. The fast bond among Zane, Malvina, and Tru is believably drawn. A time line and facts about Hurricane Katrina and its aftermath are included.–Jennifer Schultz, Fauquier County Public Library, Warrenton, VA